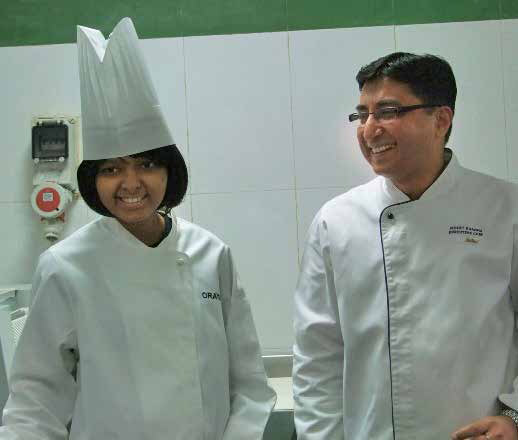 When you want something with all your heart, the universe conspires in helping you achieve it. This is something thirteen-year-old Oraya experienced and started believing after her wish was fulfilled.

On 15th October 2011, Oraya lay quietly in her hospital bed with her parents beside her. She was confused and didn’t know what was happening. At 13 years, all she wanted was to go home. Suddenly, she spotted a couple of young people chatting with some patients. Gradually, they came to her bed and introduced themselves as volunteers from Make-A-Wish India’s Delhi division. They asked if they could spend some time with her to discover if she had any wishes that could make her happy.

Volunteer Ambika Ruia spoke to Oraya at the hospital in which she was being treated for a life-threatening illness. A resolute young girl, Oraya spoke to her about her passion and how it inspired her daily. She conveyed how her recent happy moments had been in the kitchen with her mom. The art of baking fascinated young Oraya and she expressed a wish of learning to bake cakes, cookies and other recipes.

An amused Ambika left Oraya’s bedside that day with a promise of astonishing her. On 9th May 2012, Oraya’s longstanding wish came true at the Radisson BLU hotel where a day-long bake session was exclusively organized for her with the head pastry chef.

Oraya was sent a private car with the hotel’s front office staff to escort her and her mother to the hotel. As soon as she got in the car, she was greeted as Chef Oraya by the chauffeur and this salutation followed throughout the day. She had never been treated this royally in her life before!

Her journey of happiness had just started. She was given a warm welcome by the hotel’s General Manager, Human Resource Head, Executive Chef and staff. She and her mother were offered a welcome drink and the hotel’s hospitality was evident in this simple gesture.

Oraya walked around like in a dream. She was given her own chef’s coat, a chef’s hat and the hotel’s chef badge before proceeding to the mighty bakery kitchen. Her happiness was now beyond expression. Dressed in her uniform and accompanied by the Executive Chef, Mohit Khanna, Oraya’s joy knew no bounds as the chefs greeted her with respect.

Chef Shantanu from the bakery and his whole team not only took out time to teach Oraya to bake cakes and cookies, but also patiently answered the many questions from the aspiring pâtissier.

Oraya’s first cake rose beautifully in the oven and she proceeded to decorate it with circles and hearts. Then she started on the cookies, which were crisp on the outside and soft inside—signs of a job well done. Chef Shantanu and his team were very pleased with Oraya’s skill in handling kitchen equipments and in preparing the dishes.

At the end of the baking session, a delicious eight-course lunch was served to Oraya and her mother, the hotel team and the Make-A-Wish Delhi staff. After lunch, they were led to a tastefully decorated suite where they were asked to rest and freshen up for evening tea and a photo session with the press. Overwhelmed by the attention, Oraya exclaimed, “I have been made to feel so special after a very long time!”

That fateful day gave wings to Oraya’s passion for baking. She had found her calling. Today, at the young age of 17, she has her own business called Oraya’s Oven, which she actively promotes through social media. From superman and minion cupcakes to edible flowers and white butter cream rosette cakes with silver dusting, her mouth-watering offerings have Delhi licking their fingers and asking for more.

Oraya’s perseverance and courage in facing her trials has made her the strong young girl she is today. Her most cherished dream gave her the optimism to pursue her ambition of baking for the world, a vision whose foundation was laid by Make-A-Wish three and a half years ago.

“It’s in the kitchen where the warmth of shared memories, laughter and life create recipes that span generations,” says Oraya. Sweet Oraya can’t thank Make-A-Wish India enough for making her dream come true, but it is us who can’t thank her enough for showing us the impact of a small wish come true!