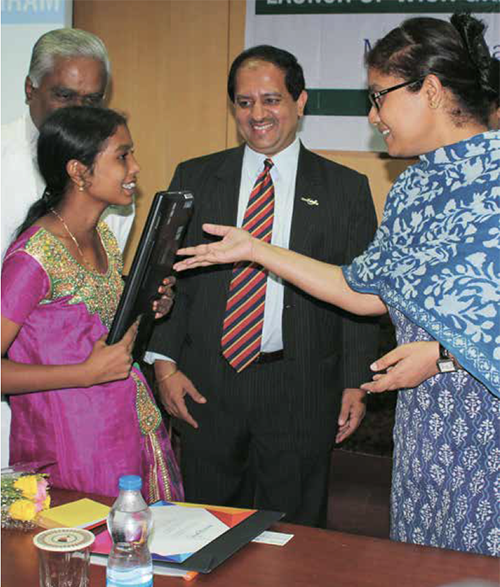 In the Namakkal district of Tamil Nadu lived a little girl with big dreams. Her name is Sakthi Jeevitha and she lives with her parents and younger sister, Dharanya. They live in a small home and do not have the best amenities or luxuries. Her father works as a mill worker and mother is a daily wage earner. They are very simple people and not very well educated. Daily life is a struggle but their daughter, Sakthi, has big dreams for the future. She is studious and ambitious and wants to be a Collector one day.

Sakthi is a smart girl and works hard to accomplish her dreams. She is very active in school, where she loves English and Social Science the most. She participates and has excelled in every competition at her school. She speaks well and is great at sports and has won many prizes. A bright student, she does well in school. Sakthi is 14 and is studying in class 10, in which she worked very hard to score good grades. Her future seemed bright until the ill-fated day when she was diagnosed with a life-threatening illness.

In October 2014, the volunteers from Make-A-Wish India met her at Ramakrishna hospital in Coimbatore. Sakthi is an exuberant and talkative girl. She immediately started speaking to the volunteers and told them how many prizes she had won. When one of the volunteers asked her what she liked apart from studying, she replied “sports”. She loves sports and has won many awards. But due to her illness, she is unable to play anymore. Sakthi was upset with that but she quickly shrugged away her sadness and continued talking.

The volunteers asked her about her wish. She was happy to share her wish of having a laptop which would help her in her development and in her studies. She continued to speak, “I want to be a District Collector one day. I would love to meet Mrs. Archana Patnaik, who is our District Collector and interact with her. It will be a privilege to meet her.” The volunteers promised to return soon. With that, they left the hospital and began preparing for the wish-fulfilment process.

Sakthi’s wish was not an ordinary one, but neither was her dream. It had to be fulfilled in a grand manner and for that, an event had to be organized. The MakeA-Wish team started working towards the wish fulfilment.

14th October, 2014, was to be a special day not only for Sakthi but also for Make-A-Wish as on that day the Make-A-Wish program was to be inaugurated at the Ramakrishna Hospital. Sakthi was asked to give a speech. She was very excited about that and started preparing her speech for the inauguration day immediately.

Finally, the day arrived. Mrs. Archana Patnaik, the District Collector, was also attending the event. When Sakthi reached the venue, many people were gathered for the inauguration. It was an important day for the hospital too. The event began with the CEO of Make-A-Wish India, Mr. Deepak S. Bhatia welcoming and felicitating the Collector. Then the process of wish-granting began. Sakthi was called on stage and Mrs. Patnaik handed over the laptop to her. Sakthi’s happiness knew no bounds. She was not just excited to receive a laptop, something that she had dearly desired, but was very happy to be receiving it from someone she respected and admired so much.

During the speech, she shared her joy with everyone and expressed her gratitude towards Make-A-Wish Foundation. She said, “I thank Make-A-Wish Foundation from the bottom of my heart. We all have dreams but everyone’s dreams don’t come true. It is only some lucky people like me whose dreams are fulfilled. Thank you Make-A-Wish for giving wings to my dreams.” It was a beautiful speech that touched everyone’s heart.

Sakthi has passed her class 10 exam and is now studying in the 11th grade. She stays in a school hostel and is enjoying every bit of her life. She continues to be a bright student and she still excels in her exams. In her recent SSLC exam, held in March 2015, she scored 414/500 (83%). Her school principal, too, is very supportive of her and encourages her to achieve her dreams.

She loves the laptop and has joined a short-term computer course. The next step is to continue with higher studies and work towards being a Collector one day!