Safety Is His Desire 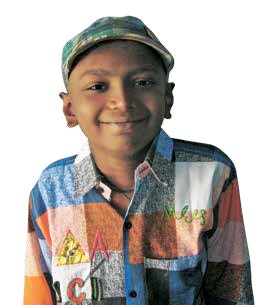 Today’s youngsters are very ambitious and try to explore different avenues and choose their careers accordingly. There are some who choose a life of service to society. Our wish child, Aniket, too wants to dedicate his life as a policeman.

Aniket Parmar, a 14-year-old lively boy staying in Ahmedabad, is a happy, fun-loving and responsible child who was always regular with his academics. His father, Naranbhai, works in a private firm while his mother Tulsiben is a housewife. He is very attached to his younger sister Gayatri and is, not surprisingly, very protective of her.

In 2012, Aniket was diagnosed with a life-threatening illness and was admitted in the GCRI Hospital under Dr. Nitin Joshi. His parents were not ready to believe that their son was suffering from such a grave illness. Their initial shock and sorrow turned into a quiet determination to fight it out and this greatly helped Aniket.

The Make-A-Wish India volunteers of the Ahmedabad division, Kashmeera and Anita, met Aniket in the hospital and found him to be a very attentive and mature boy. Upon being asked about his wish, Aniket confidently said that he wanted to be a police officer. His eyes shone with excitement as he explained his dream of serving the country by making Ahmedabad safe for everyone.

The first step in making Aniket a police officer was to arrange for his uniform. We found a tailor who gave us the outfit in two days and did not charge for it. All the badges and decorations were put up by the Commissioner’s staff a day prior to the wish fulfilment.

On the set day, we picked up Aniket and his family from the hospital and went to the Commissioner’s office. Aniket’s family knew about the entire thing but Aniket was kept unaware of the surprise. We kept his eyes closed and he later opened them to behold his very own police uniform. Young Aniket’s astonishment rendered him speechless for a few moments.

During the day, he gave orders, shared his ideas and explained how he wanted the country to be a safer place. He was then driven in a police car to the Meghaninagar police station where he dutifully attended to a noise pollution complaint and gave orders to stop the noise immediately.

Later, Aniket interacted with the press by posing for pictures and interviews.

Aniket was so overwhelmed that he kept thanking the Make-A-Wish India team repeatedly. His parents watched ecstatically as their son’s face shone with joy and life. They had not seen Aniket so lively since his diagnosis.

From there, he was directly taken to the hospital where he underwent chemotherapy and received congratulations on his day as a policeman. Finally, we met Ms. Pooja, the principal of Evergreen school where Aniket studies. “Before this experience, Aniket was very shy and his confidence levels were low. But, ever since having his wish, he is very studious and regular,” she said.

Aniket has recovered now, but has to undergo tests every 3 months to monitor his health. He is very determined and brave; attends his school regularly and even plays football and cricket.