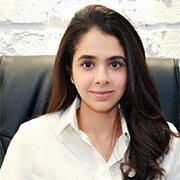 Ridhima Lulla is the Chief Content Officer at the Eros Group, with core focus on the creative expression for Eros Now, a leading South Asian OTT platform with users from over 150 countries across the world.

Under Ridhima’s leadership, Eros Now has produced various refreshing and entertaining shows including Side Hero, Smoke, Metro Park Season 1&2, Flesh, Modi: Journey of A Common Man, to name a few. Ridhima’s commitment to offer the most relevant stories in an engaging format led to the release of two unique shows – A Viral Wedding: Made in Lockdown and Metro Park: Quarantine Edition, which were completely shot and released amidst the pandemic period.

Ridhima has in the past worked for several renowned Indian and international companies such as STX Entertainment, Credit Suisse and film projects including Ra.One and Dr Cabbie in different roles.

Ridhima is a post-graduate in Film Production from University of California, LA, and has a Bachelor’s in Business Management (BBM), Liberal Arts and Sciences from Regent’s University London. She also holds several Diplomas in Digital Filmmaking from New York Film Academy.