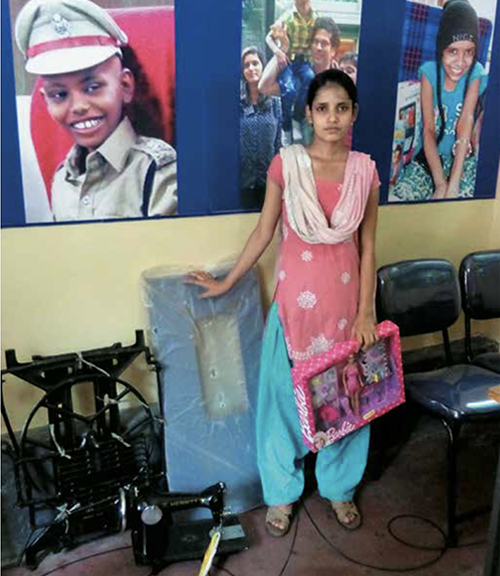 Sunita’s nature was true to her name. Sunita meant well behaved and polite. She lived in a beautiful village in Bihar with her parents, a sister and a brother. She was the eldest among three children. Her father was a local businessman with monthly earnings of `9,000 which wasn’t enough to suffice for a family of five people but he worked hard to make ends meet. Sunita had a sense of responsibility from a very young age; she learned sewing and handicraft work from her mother. She started stitching clothes to help her family and it was something she loved doing.

Things became difficult when Sunita was diagnosed with a life-threatening illness. Noisy days filled with laughter turned into depressing silences. On one hand, it was difficult to manage day-to-day expenses and, on the other hand, there was a growing expense for Sunita’s treatment. Her father started working harder but that wasn’t enough. Sunita did not give up; she continued to support her Baba even through her illness because she didn’t want to leave him alone in a difficult time. She wanted to help for her treatment in whatever way possible. She would often speak to her mother about how the family’s expenses had drastically increased due to her treatment. “Ma I want to get well soon. It hurts me to see Baba and you all in this state. Once I am fine I will work hard and all our troubles will vanish”. Her mother would hide her tears and continue to encourage her daughter.

Sunita was receiving treatment at RTIICS (Rabindranath Tagore International Institute of Cardiac Sciences) in Kolkata, where she had undergone a surgery at the hospital and was now recuperating. The surgery had made her weak and pale, but she was trying her best to cope with the pain. Her father would look at his daughter and wonder where her lovely smile had disappeared.

Soumi was a dedicated volunteer with Make-A-Wish India and had been working with the foundation for a few years. Soumi visited Sunita and told her about Make-A-Wish India foundation and how she was there to know about Sunita’s wishes. Sunita politely replied to Soumi’s questions with a little hesitation since she was not the kind of girl who opened up to new people instantly.

Soumi could sense her discomfort so she spoke to Sunita about various lighthearted things to make her relaxed. She asked her about Kolkata, whether she liked Kolkata, and if she had seen any interesting places in the city. Sunita said she couldn’t visit any place because of her illness.

Soumi asked Sunita about her wishes, if she wanted something or if she had any dreams. She was hesitant to share her wishes with Soumi, but her Baba gave her a reassuring look, and so she started opening up to Soumi. She told her that she loved to sew clothes and wanted to start her own business. So it was logical that a new sewing machine would fulfill that dream.

Soumi was very impressed with the positive attitude of a girl who was fighting a life-threatening illness, and she wanted to fulfill Sunita’s wish as soon as possible. Sunita, on the other hand, had started making plans of what she would do when she would receive a new sewing machine. How will she start her business? How will she run it? She wondered if she would be able to make that beautiful dress from the magazine that she wished to make. She could hardly wait for her gift. Although for a short time, thinking about the plans made her forget the pain. She had something to look forward to.

26th May 2015 was the big day—the day when Sunita’s wishes would be fulfilled. Sunita was so excited to see them that she sat up in bed and welcomed them.

Finally, Sunita’s gift was handed over to her and she couldn’t wait to open it. A twinkle appeared in her eyes the moment she saw her sewing machine. It was better than what she had expected. Her face had a big smile. She opened the manual to see if it was the latest model and had all the technical features and tools that she wanted.

Her parents could not hide their excitement either. They were so happy to see their daughter smile after such a long time. Sunita couldn’t stop smiling and couldn’t stop thanking everyone.

Stories like Sunita’s are a constant reminder for the hope, strength, and joy of a cherished wish come true.