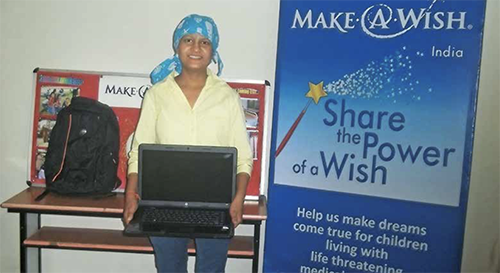 Ruby Sohan Singh, a 15 year old, lived with her parents in a beautiful village in Punjab, a state in Northern India. A bright, ambitious Class 10 student, she grew up amidst the beauty of fruit orchards that her father owned. She played with animals on the farm and enjoyed farm activities. It was her love for animals that gave birth to her dream of becoming a veterinarian one day. She was ready for all the hard work and dedication required to get her an admission into a medical college. Life was beautiful and full of dreams until the day she fell ill. Then started a series of hospital visits and Ruby was forced to take a break from her studies for a year.

“Good morning, Ruby”, said a chirpy voice breaking the silence in the hospital room. It was Smita Shah, a dedicated and committed volunteer who had been working with Make-A-Wish India’s Jaipur division for several years. She had come to visit Ruby through a doctor’s reference from the J. K. Lon Hospital in Jaipur, where Ruby was being treated.

Smita introduced herself, the foundation she was representing, and explained the social cause of the foundation, Make-A-Wish India. Ruby was curious to know more and listened attentively. Smita, removed a knowledge book and handed it over to Ruby, saying it was a small gift. Ruby looked at the book, smiled, and then looked at Smita with a puzzled expression. She was both surprised and excited to receive this unexpected gift. She thanked Smita and both of them continued their conversation. Ruby enthusiastically spoke about her keen interest in studies, how much she enjoyed them, and how disappointed she was since the treatment had disturbed her studies.

They spoke about various other things. Ruby also told Smita how much she loved animals and that she wanted to be a veterinarian one day. Just the thought of having a laptop brought a smile to her face. That smile gave Smita the idea of a wish Ruby would really cherish.

Smita and the Make-A-Wish India team immediately started working towards fulfilling Ruby’s wish. By selecting the finest model with the latest technology, the best laptop was arranged for Ruby in just one week. The team requested Ruby’s father to get Ruby over to their Jaipur office so that she could receive her surprise.

On 10th October 2013, Ruby was at the Make-A-Wish India office in Jaipur along with her father. She received a warm welcome from Smita and her colleagues, but she had no idea what was in store for her. Smita noticed that she had become seemingly more weak and dull in just one week. She and the others gathered around Ruby and surprised her with her wish. She thanked everyone and posed excitedly for a photograph.

Ruby was on top of the world; exploring the laptop and learning through a new medium kept her occupied and happy. She had found a way to do something she absolutely loved. She now spent her time studying instead of thinking about her illness. Despite the break of one year from her regular school, she did not miss her studies. Even though she wasn’t attending regular school, she could get help from her friends through email. She continued her studies online and finally appeared for her board exams. All her hard work paid off when she scored 92% in her exams. Ruby had overcome so many hurdles and achieved a milestone in her life.

It’s been two years since Ruby started her fight against a life-threatening disease. Today her health is absolutely fine and she undergoes check-ups every three months. Once, during her visit to Jaipur for her check-up, she met our volunteers at the hospital and was extremely happy to see them.

Ruby still loves to play with animals. Today when NRI guests visit her family at their home, she proudly takes them to visit her farm. She also milks cows and then gladly serves them some fresh milk. They love to talk to her. Her father’s eyes light up with tears of happiness and with pride when he sees her conversing in English with their NRI guests. Ruby speaks fluent English thanks to the exposure she has had to the internet in the last couple of years. She is also pursuing her studies at a college. A talented and brave girl like Ruby is an inspiration to many in her village.