The Impact of Celebrity

Well-wishers get so committed to helping the Make-A-Wish mission that it becomes part of their identity. From professional skaters to custom motorcycle builders, people of all backgrounds continue helping the foundation share the power of a wish: 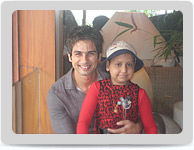 I Wish to Meet Shahid Kapoor

Shreya Soni is a 7 years old cute little girl from the City of Joy (Kolkata) where she stays with her parents and siblings. She is child full of life and energy. Her hobbies include drawing and playing indoor games. She loves watching cartoons and her favorite cartoon character is Shin Chan. When our volunteers met her to identify her most cherished wish, she only had one wish i.e.-to meet Mr. Shahid Kapoor (Hindi film actor). When the National Office contacted Mr. Kapoor, he instantly agreed to fulfill Shreya’s wish by meeting her. The date was decided, time was fixed and Shreya was on cloud nine as she was meeting her favorite star. Mr Kapoor turned no stone unturned to make this wish a special one. He got all details about the child’s likes, friends, hobbies etc., Finally on 21st February 2010 Shreya met her favorite star. She was presented with a huge soft toy and a basket full of goodies by Mr. Kapoor. She told him about her favorite movies and songs.

Her siblings wanted to talk to Mr. Kapoor over the phone as they were in Kolkata and this request of hers was also fulfilled by him when he talked with both her siblings. It was truly one of the happiest moments of Shreyas’s life and we thank Mr. Shahid Kapoor for coming forward and making her wish come true.

When the Little Master Was Bowled Over

Loved by millions across the world, Sachin Ramesh Tendulkar continues to be a true role model both on and off the field. When the foundation team approached the little master requesting him to grant the wish of Varun Sudhir Kumar, a 15-year-old child he instantly agreed. The morning of 4th May was a special day in the life of our wish child. After all he was granted his wish of meeting his idol Sachin Tendulkar! Mr. Tendulkar invited Varun to his residence and patiently answered all the questions that the youngster had. Impressed by his knowledge, he later tweeted, “Even adults haven’t asked me such insightful questions. He is one of the brightest kids I have ever met. I pray for his speedy recovery.” We hope that this wonderful experience plays long innings in Varun’s life!