A Wish Among the Stars 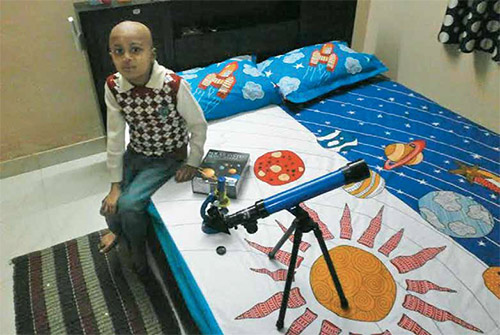 Vishal was from a village in Karnataka where his father owned a small business. Growing up, he was fascinated by the sky and all the things that adorned it. He would lie on his bed by the window and watch the stars till he fell asleep. The night sky filled with stars transported him to a different world, perhaps a world of his dreams.

As Vishal grew older, he was introduced to books. It was through books that he learnt of the solar system and outer space and was awed by its magnificence. He would look at their pictures for hours and ask his mother if those wondrous pictures were indeed real. “Yes they are. But, they are far away from us, somewhere in the wide sky,” she would reply.

Vishal’s newfound knowledge egged him on to see these wonders with his own eyes. Sensing her son’s wish, his mother would tell him that a telescope was necessary to experience them. “I want a telescope so that I can see them all, mummy,” Vishal would request his mother.

Vishal was eight when he was diagnosed with a life-threatening illness. His parents had to take him to Bangalore for treatment. Unfortunately, Vishal’s illness was in an advanced stage and his condition was very serious. Due to his condition, the family left their home and rented a small house near the hospital.

Vishal missed his home, but most of all, he missed his bed by the window. “Mummy, I can’t see the stars anymore,” he would tell his mother. She would try to comfort and lull him to sleep. Vishal’s mother knew that her son’s dream of enjoying the view from his beloved window might never be possible. Vishal’s health was rapidly deteriorating.

One day, volunteers from Make-A-Wish India visited Vishal. He was very weak and could hardly speak. The volunteers tried to joke around and soon little Vishal forgetting his pain laughed along. He happily spoke about the stars and the sky. When he was asked what his wish was, he said, “I want to be there, amongst the stars and the solar system. I want a telescope too, to see the wonders of the sky.”

When the volunteers promised Vishal’s parents that they would fulfil his wish, Vishal’s father suggested they do it quick. The dejected father continued, “The doctors have asked us to take him home in a few days. They say he can be at peace there.” They had tried everything that was medically possible but it was not in their hands anymore.

Vishal’s wish was taken up as a Rush Wish and the team started planning his wish fulfilment in earnest. On the day that Vishal was slated to return home, the volunteers reached his house and started work quickly.

Two hours later, Vishal was home. As soon as he entered the house, his mouth opened with astonishment. The only word he uttered was, “Wow!” Vishal was in his dream world. The sun was shining bright and the planets were rotating. He was also given a baby telescope. His eyes gleamed with excitement. “Mummy, I can see the planets and the galaxy! I can see them all!” he cried in joy. His parents were happy to see delight and excitement replace the weariness on Vishal’s face.

The volunteers used an LED projector to project moving stars and fixed up a solar system that worked on remote control. The sun could be lit up and planets would rotate around it. They put up huge LED stars on the bed sheets and pillow covers and radium stars were put up on black curtains.

Vishal and his family forgot their pain and enjoyed the special moment. It was probably their last special occasion together as a happy little family.

Savio, one of the volunteers cherishes his experience and says, “I can never forget the smile on Vishal’s face. For a little while, it looked like he had regained his strength. Such is the power of a wish come true.”

Although Vishal is not with us anymore, perhaps he is somewhere up there, in his favourite place, the sky. One amongst the many stars, we like to think that he is looking down upon us and letting us know that he is happy.