A Hero Meets a Superstar 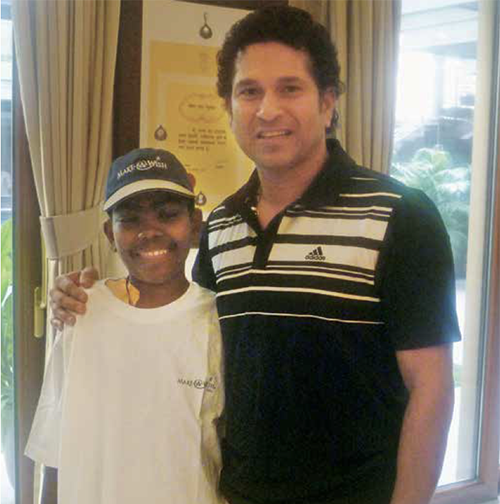 Rahul Jediya has been suffering from a life-threatening disease and is being treated at Nair Hospital, Mumbai. A big fan of the great legend master blaster Sachin Tendulkar, during one of Make-A-Wish Foundation’s wish-granting sessions at the hospital, our volunteers spotted Rahul as a smart and brilliant kid. He was very friendly and got comfortable with the volunteers of Make-A-Wish India, Mumbai division, without any hesitation. He didn’t require any coaxing and was always active and on his feet for any activity, especially cricket! Cricket was, is and will be Rahul’s favourite sport. He loves to play cricket with his friends. ‘Life looks positive for those who never lose hope’, is his matured thought at such an early age.

When our volunteers asked Rahul what he would wish for if a genie suddenly appeared in front of him, his instant reply was that he would wish to meet his role model and the god of cricket Sachin Tendulkar. Rahul had always dreamed of being like Sachin, and meeting him would boost his aspiration and encourage him in life.

As soon as Make-A-Wish India noted Rahul’s wish, they contacted Padmashri Sachin Tendulkar and requested him to meet little Rahul, and he willingly agreed. The Foundation then arranged a date to meet up and Rahul’s wish was soon ready to be fulfilled.

Just a few days before his operation, on February 24, 2014, Rahul was picked up from Nair Hospital by the staff of Make-A-Wish India and taken to Sachin Tendulkar’s residence in Mumbai. Rahul was very excited to meet the person he had only seen on television. He had never thought that he would get a chance to meet his hero at such an early age. He had so many things to tell Sachin and was completely prepared with everything that he wanted to ask the cricketer.

When he met Sachin Tendulkar, his happiness knew no bounds. He was on cloud nine. His dream had come true and he couldn’t believe that his lifelong hero was right in front of him. He spoke to Sachin for nearly two hours, talking and sharing his thoughts. Apart from playing cricket, he wanted to know the things Sachin did so he too can develop leadership qualities like him.

Meeting Sachin was the best thing that ever happened to him. His happiness knew no bounds and the pain of the surgery he was to undergo was already over.

Till that day, Rahul had only played cricket with his friends, but now he was going to play with the best cricketer of India; a person that everybody longs to meet, a legend who has millions of fans.

Sachin has always made himself available to meet the wish kids and make their wish-granting experience memorable in his own way. This time he wanted the wish kids to know the importance of Independence Day and grant their wish in a unique manner.

Rahul is currently studying in the 9th standard and met his icon Sachin Tendulkar once again on August 14, 2015, at Sachin’s residence along with the other kids. They all played cricket for hours together. Rahul was overwhelmed as his role model had now become his friend as he enjoyed his favourite sport with his favourite batsman.

He was glad to meet Sachin and had a broad smile on his face. He was grateful and thanked everyone with all his heart for turning his dream into a reality.

All the kids were gifted a bat, a ball and a T-shirt autographed by Sachin Tendulkar himself, as a memory to be cherished. Sachin Tendulkar tweeted about this event on his Twitter handle saying “#HappyIndependenceDay to all of us! Spent the eve with young citizens from @MakeAWish India. They have great hope and positivity. Enjoyed the evening chatting and playing cricket. Picking up a bat for these children was special!”

This meeting with Sachin gave Rahul a new perception of life. It helped him see the side of life beyond his illness. His dream had come true and this gave him the assurance that his other dreams in life can be fulfilled too. It also gave him the courage to undergo his treatment and face the odds. Rahul still smiles whenever he recollects this meeting with Sachin Tendulkar and the time they spent playing cricket.