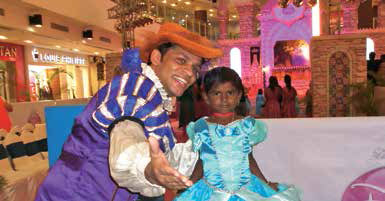 This is a story of how Make-A-Wish India recognized and fulfilled a beautiful 5-year-old’s wish.

Pranali was a happy-go-lucky child, living and enjoying her carefree childhood days in Pune with her parents and younger sister, who she loved immensely. Her regular days included going to school, playing and spending time with her family. At the age of 5, the only thing that ever bothered her was having to wake up early for school and doing homework. Little did she or her family know that it was never going to be the same for her, as God had other plans. Pranali and her family’s life turned upside down when she was diagnosed with a life-threatening illness at a tender age.

It was during her treatment at Sassoon hospital in Pune that a Make-A-Wish India volunteer, Mitalee, visited Pranali. Mitalee recalls that the first time she met Pranali, she had been crying continuously. All attempts to strike a conversation or cheer her up went in vain. The otherwise chirpy and talkative Pranali had now become very quiet in the hospital.

Mitalee visited Pranali again at another time and eventually won Pranali’s trust. Pranali’s parents informed Mitalee that she had always been a very talented and soft-spoken girl, but the illness, medicines, hospital visits and simply being away from her real life had started taking its toll on her. Mitalee also learned from Pranali’s father that the illness had rendered her very weak due to which she had to spend most of her time indoors.

Mitalee learnt that Pranali loved listening to stories and so she started narrating the story of a king. Listening intently to the story, Pranali inquired if she could narrate the story of a pari. Mitalee asked her what a pari was. Instantly, with the help of her father, Pranali recited the Cinderella story. Her eyes shone and she couldn’t stop smiling as she described how pretty Cinderella was and what a wonderful gown she wore to the magnificent Prince’s ball. Never had Mitalee seen her so happy. So Mitalee asked, “Do you want to be a pari?” to which Pranali replied, “I wish I could be Cinderella”.

She animatedly started spelling out the similarities between Cinderella and herself which included that both of them love pet animals, both love new dresses and both have sisters. She also talked about her love for Cinderella movies and cartoons.

“Like stardust glistening on fairy’s wings, little girl’s dreams were of magical things.” So this cute little girl’s wish to become Cinderella was identified.

On 22nd January 2014, Pranali was called to a mall, where she was told her wish was to be fulfilled. When she reached there along with her father, she saw a beautiful large palace replica set up in the mall. She was royally welcomed by three Disney Princesses—Cinderella, Rapunzel and Ariel. Seeing this, she was utterly at a loss for words and cried tears of joy. She was given her own magnificent Cinderella dress and taken for tiara and make-up.

The Disney Princess Cinderella looked exactly like the ones she had seen in her story books—tall, fair, with long golden hair. She looked really pretty herself but the reason was neither the dress nor the make-up—it was her electrifying smile.

There was one more similarity between Cinderella and Pranali. Both of them took pleasure in small things, even when greater things crumbled. And that’s what we all should learn.

God gives his hardest battles to his strongest soldiers and, without a doubt, Pranali being one of them, knocked down the pressures of her illness with her positivity and determination.

She is doing so much better now and has started going back to school. It has been one and a half years since then but Pranali still remembers every minute of that day very vividly. She is often overjoyed when she tells everyone about the best day of her life.

Make-A-Wish India wishes that Pranali continues to rise, shine, and smile…and is very proud of its association with The Walt Disney company and sincerely thanks the team at Disney India for the support extended to make such special wishes come true.