A Day as a Pastry Chef 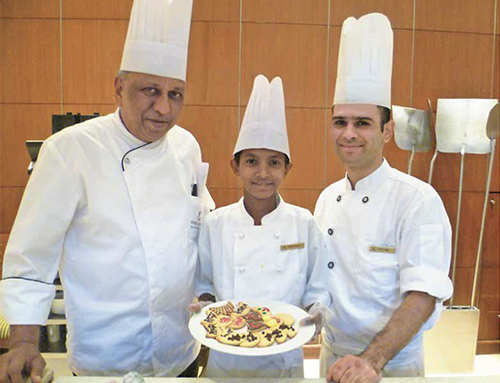 The word hospitality means generous and friendly treatment of visitors and guests by providing them food and drinks. With the growth of the food network, more people than ever are interested in fine dining and in the people who create that experience.

Swapnil Mukadam is 14 years old and is at the Sion hospital being treated for a life-threatening medical condition. Swapnil is mature beyond his years and he made interesting conversation with Make-A-Wish India volunteers. He mentioned that he is passionate about cooking and stays glued to the TV to follow culinary shows. When he is not in front of the TV, he is hovering around his mother helping her cut vegetables and assists her in the daily cooking routine.

Swapnil indicated that he wished to own an oven toaster and griller (OTG) or a bakery kit. He said he is fascinated by baking and is keen on learning the process. He asked Make-A-Wish India if anyone would teach him to bake cakes and cookies because he dreams of making these desserts for his family and friends.

On 27th January 2015, Swapnil’s wish to own an OTG was fulfilled in Leela Mumbai, a 5-Star Hotel near the Mumbai International Airport. He could not contain his excitement and it showed on his face. He was in a state of disbelief that his wish would have so much fun and drama attached to it. He and his parents were warmly welcomed like VIPs with a ceremonial Tilak and garland in the main lobby area, and were overwhelmed because this was their first time out of the hospital. Swapnil was then led to a fancy hotel room to change into the Pastry Chef’s uniform where he donned the chef’s cap and apron, and all this seemed like a dream to him.

Swapnil was once again warmly welcomed into the pastry kitchen. As the kitchen was readied for this little chef, he discussed his wish to make a strawberry dessert cake, cookies and a basic pound cake. The pastry kitchen staff was impressed with the amount of knowledge Swapnil already had about baking. The Pastry Chef gave him a live demo and got him to work alongside him as they made the strawberry dessert cake. The Chef on duty also taught him to do the actual plating in order to make it appealing to the eyes of the diner.

After Swapnil received his OTG at the Leela Mumbai kitchen, he said, “This was the most outstanding day in my life and this is an experience that’s unforgettable”. He was very eager for his parents to taste his cakes and cookies, so while they were sampling his cakes and cookies, he looked at them expectantly for their comments. Everyone appreciated his baking and told him that one day he will be a great Chef. After thanking everyone at the Leela Pastry Kitchen and Make-A-Wish India, he asked the Leela Mumbai’s Marketing Head, Ms Shiraz, if they would employ him when he grows up and becomes a Professional Pastry Chef and Leela Mumbai promised that they would love to have him work as their Pastry Chef.

Swapnil’s energy was revived, and his smile showed us that the only wish MakeA-Wish India has for Swapnil is that he keeps smiling.